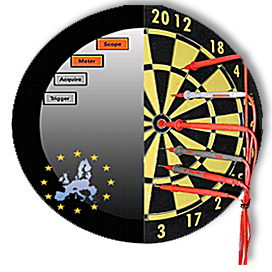 It is true that my first purchase of a FLUKE meter it did turn in to a mini adventure.

And I am talking about my personal discovery that the past revision of the Fluke 87V found to have a problem with the mobile phones and the GSM frequencies.

Now day’s looks like an adventure, but it was a major story at the end of 2010.

I was a simple forum member when I found a message from a younger forum member, that his own 87V was starting to play up (screen flickering), and that it possibly caused by his Wi-Fi router or his mobile phone.

It came in perfect condition shiny and untouched, and my pride for it was major.

I did take very seriously the report about the play up of the 87V due the radio signals interference, due the fact that some times I do repair FM and UHF transmitters, and I was aware that many devices gets effected when they are close to transmitters of significant output in Watts.

By getting my mobile phone over the 87V in just seconds I managed to turn it in to a brick.

It lost it firmware and stuck in the firmware loader mode, by displaying (F8-) & (Err) messages which was repeatable shown up every 3 seconds (August 13-2010).

As soon those news traveled back to Everett, WA (FLUKE Industrial Group), Mr. Duane Smith came in contact with me.

This first reinsurance that softened my own panic, was that I will get a new replacement meter, and even gave me the choice to select another 87V or the FLUKE 28II.

What it did impressed me with the communication with Mr. Duane Smith, was the direct personal interest that he have shown for the fast resolution of my case, plus that I did manage to discuss and exchange some technical thoughts with him (about 40 emails).

At September 7 2010, my new and sealed FLUKE 28II arrived at my door step, and emotionally I was good again.

So good that I got and another three old bench top FLUKE meters, so to expand the new family even further, especially with the 8050A that it came due it 20.000 counts as another comparison point.

When I got my new 28II from the Greek authorized reseller, he charged me with the shipping back cost and also delayed about four days the shipping from his base.

The shipping delay it did made me mad more than the unjustified shipping back charges, which I discovered on the delivery.

About the shipping delay, I did have the chance to make to him as complain and joke, my request that I worth getting two fuses as compensation (that I was aware that I will never get).

I did post a message in the forum about those details, my story about the 87V GSM and the replacement unit, it did have a dedicated topic in the forum, in which I was sharing every good news about the resolution of my case.

Some months later, I am getting one email from Everett, WA and Mr. Duane Smith, the shipping back charges story, it did mater to them, and he send me eight fuses as gift.

FLUKE started immediately researching the GSM issue on the 87V  as soon it become known, and they made public comments about it and the GSM FIX, almost 8 months later.

The problem was specifically when the mobile phone was operating at the GSM band, there was no problem with the 3G frequencies’.

The updated 87V/EUR version came at about the end of 2011 and truly cured.

Well I do have a battle in me, about my feelings for FLUKE as consumer.

They did impress me with their direct way about handling tough situations and especially their speed, plus the fact that they do monitor the satisfaction level of their customers.

But as European I have to write down few complains:

a) People you are killing us with the pricing in Europe and you do look unwilling about changing your marketing policy.

b) The web site of Fluke Europe looks as one dead front cover.

c) You are excluding Europeans from the main FLUKE website, about giveaways and special offers.

And I will simply say, do not expect a bright future in Europe with out making first the proper corrections.

After some reading  of the calibration manuals of those bench top FLUKE meters, today I have them calibrated at the AC range too.  This picture is taken before I get that educated ! :-)